It is common for people to suddenly reverse their speakers’ wires, especially when the speaker wires are not labeled for polarity.

If you’re a car audio enthusiast, you probably know that many car speakers are polarity sensitive. But what does that mean, and why does it matter? Let’s find out.

Car speakers are polarity sensitive because they are wired with positive and negative connections, typically labeled “+” and “–.” When these two are misconnected, the speakers will not function as intended and won’t be able to produce sound effectively.

Tip: If you are using the built-in car speakers you got from your manufacturer, there shouldn’t be many speaker polarity problems because wires should have been configured correctly.

However, if you have an older car installation with no clear positive or negative wires, you can use a phase tester (link to Amazon) to ensure the speakers are connected correctly.

In this article, I will detail what is a correct speaker polarity and why it is important, and give tips to ensure your car audio setup is functioning optimally. Keep reading to find out more.

What Is the Speaker’s Polarity?

In case you don’t know, soundwaves come with their own polarity, which is the series of positive and negative pressures they make in the air.

Meanwhile, a negative pressure happens when the soundwave makes a change that is below the normal air pressure in the room.

So, in other words, when we talk about the polarity of sound waves coming from a speaker, we are talking about the wavelength created between the external amplifier and the speaker.

Wires that connect both the external power source and the speaker determine the polarity, so it is important to remember that the amplifier’s positive terminal should always be connected to the positive speaker terminal.

The same goes for the negative terminals. If you swap those, the speakers will work in reverse polarity.

Polarity matters greatly when it comes to creating a great listening experience with your car speakers.

Fortunately, incorrect wiring doesn’t damage the actual equipment, so are no lasting damage to worry about.

However, you should still ensure the correct polarity of speakers for the best possible listening experience.

The polarity dictates the movement that your car speakers will be making, and if it is inverted, the movement is also inversed, so the sound will not be as good as you would expect it to be.

The changes that inverse polarity makes are much more noticeable when you only have one inversed speaker. It becomes less noticeable if all car speakers are inversed.

However, to get the best sound quality possible, it is always recommended to check your speakers’ wiring and make sure that each wire is in the correct terminal.

How Do Car Speakers Work?

When speakers receive an audio signal from the amp outputs, they move backward and forward.

The backward movement represents a negative pressure, while the forward position represents the positive pressure the speakers make in the air particles in the car.

In that regard, polarity becomes important because the electrical current from the amplifier to the speakers should match the terminal.

For example, even if the current sent to the speakers from the amplifier is positive, but you connected the wire to the negative terminal, the movement the speaker will be making will be backward even though the sound it produces is positive.

This could create weird distortions and changes in the sound quality coming from the speakers.

How to Tell if Speaker Polarity Is Reversed?

How to Check Speaker Polarity?

The best way to tell whether or not your car speakers’ polarity is not inversed is by using a phase tester for speakers.

A polarity tester is a tool specifically made for these cases and is not very expensive.

There are speaker testers that generate their own signals so they can be used for other purposes as well, but the one I have been using is PAC TL-PTG2. 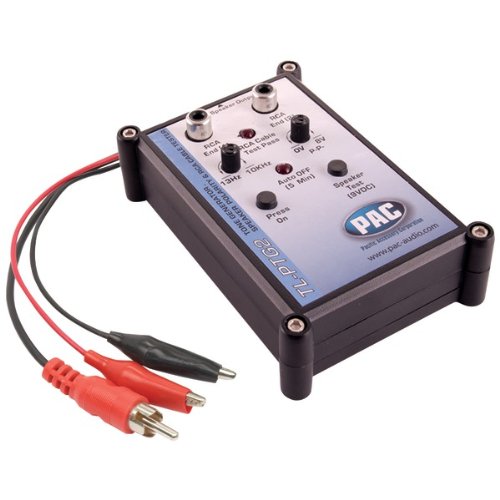 It does not only test the wires but also checks if the speaker works properly.

Pac tester is available on Amazon, so if you are going to test either wires or speakers, click this link and check the latest price.

Using a speaker tester is relatively easy, and you don’t need much effort to know how to use one.

How to Identify Positive and Negative Speaker Wires?

In most cases, you have to look at the labels on the speakers and the wires to know which ones are positive and which are negative.

Although most speaker wires have a red wire for positive and a black one for negative, different colors are used in car audio.

There are however instances where the wires don’t have labels and colors, and both are the same, especially in older car installations.

In those cases, you have to use a speaker wire tester or voltmeter to determine which is positive and which is negative.

If you don’t have the budget to buy a speaker tester, you can make a simple test using a 9V battery.

Here is how you should test the polarity of the wires using a 9 V battery:

#1. Place a speaker wire to the positive terminal of the battery. It doesn’t matter which wire you are placing on it.

#2. After that, do the same with the negative terminal of the battery. Again, it doesn’t matter if you know whether or not you are using the positive or the negative wire.

#3. Try to see how the speaker moves the moment you make the connection.

#4. If the speaker moves forward or outward, you can assume that the speaker wire connected to the battery’s positive side is the positive wire.

#5. However, if the speaker moves inward, the positive wire has been connected to your speaker’s negative terminal.

What Happens if You Reverse Speaker Wires?

For starters, the speaker polarity will be inverted because it will move forward when it is supposed to be moving backward and vice versa.

This is case-to-case basis, depending on the car speakers you have and the type of music or sounds they produce.

But, generally speaking, the sound of your car speakers is affected if the polarity is accidentally inverted.

What Sound Will My Car Speakers Produce if I Inverse the Polarity?

In that regard, when you inverse the polarity of your car speakers, some differences will be quite noticeable depending on the speakers and the music you are playing.

It also depends on whether or not you are using multiple speakers because there will be instances wherein a one-speaker setup won’t show you many changes in the sound quality if you inverse the speaker’s polarity.

In a setup with two speakers where only one is out of phase, it is quite noticeable, and you can hear the left speaker plays differently from the right, regardless of your listening position.

Here are the common changes when you inverse the polarity of your car speakers:

The most common change that is relatively easy to notice if you inverse your car speakers’ polarity is that there would be no, or little bass produced.

That’s because the bass frequencies are primarily produced by the pressure created by the in and out movement of the speaker cone.

So, if the signals are crossed, and your speakers move inward when the sound signal is supposed to make it move outward, the bass drum notes become very difficult to notice, to the point that your speakers are not producing any bass.

The music loses the impact caused by the bass, and I am sure you won’t enjoy the quality.

Cancellation is a lot more common in a pair of bass speakers and won’t be as common if you only have one car speaker working.

You can hear this quite noticeably when the car speakers are close to each other.

When there is a cancellation, the speaker with an in-phase polarity cancels and competes with the speaker’s frequency range, which has an inversed polarity.

The effect is similar to clashing a negative number with a positive number of equal values. They both end up getting canceled.

The cancellation you hear can be noticed in the bass because of how the bass is produced. In effect, both of the speakers cancel each other out.

This is much more common if the speakers are directly in front of each other.

The cancellation effect is even more noticeable when you are in a smaller car where speakers are close to each other.

In case you didn’t know what imaging is, it is when the car speakers can project an image of the instruments being played in the music.

If the car speakers are correctly wired, you can picture the instruments in front of you as if you were actually watching the musicians live.

However, poor imaging happens when the speakers are not wired correctly or are out of phase.

You won’t be able to correctly process the information coming from the music to the point that you may not be able to picture out which instrument is making certain sounds.

In other words, the sounds become vague, and your imaging gets distorted.

Now that you know that incorrect polarity can change the quality of the sounds created by your car speaker, you might wonder if it will damage your car speakers in the long run.

Especially when your speakers will be moving in the opposite direction.

While the sound quality is damaged and changed, you don’t have to worry about your equipment getting damaged if you accidentally inverse the polarity of your car speakers.

That is because the speakers’ voltage is generally the same regardless of whether the speaker cables are positive or negative.

In short, the electrical voltage isn’t changed even though it might change the signals.

Still, you may end up having speakers that will not work acoustically well when they are correctly wired after having them incorrectly wired for a long time.

The answer to the main question is YES. Car speakers are polarity sensitive, and installing the wrong polarity wires can negatively affect the sound quality of your sound system.

It is important to ensure that you are connecting the positive and negative terminals correctly, as this affects the sound quality and imaging and can also cause the cancellation of bass.

Incorrect polarity will not likely damage your car speaker, but it will significantly decrease their performance, especially when it is wrong on front speakers.

Therefore, always double-check that you connect the correct wires when installing or replacing car speakers.