I remember when car radios were simple AM/FM stereo systems.

Nowadays, there are many different options, including different screen types, so it can be difficult to decide if capacitive or resistive screens are better.

But what is the difference, and more importantly, which should you buy? Let’s find out.

In general, capacitive screens have greater sensitivity than resistive screens, meaning they respond faster to touch input. This makes them ideal for drivers who want quick access but still need to keep their eyes on the road. Resistive touchscreens are more durable because they require pressure to respond, but they are more difficult to manage with longer fingernails or through gloves.

Tip: Regardless of the screen type you will choose, if you want it to last for a long time, it should be protected from scratches or other mechanical damages.

If you value quality and visual effect, I recommend using tempered glass screen protectors either from KYKR or LFOTPP (both links to Amazon).

KYRK protectors are stronger and made from thicker glass but not available for every car radio model, so it is worth checking with both producers.

In the article below, I will compare in detail both screen types and list their pros and cons to help you make an easier decision on which one will better fit your needs.

Which Touch Screen Type Is Best for a Car?

Resistive screens are durable, so being less responsive would not be a problem for most people who use control buttons.

A resistive touchscreen is a single touchpoint interface, which means you can only tap a single touch at a time, and it does not allow you to make a smooth scrolling.

On the other hand, Capacitive screens can support multiple input points, which means you can do different things simultaneously, such as zoom in and fast scrolling, for example the song tracklists.

Capacitive screens are used mainly in cellphones when you need to fast scroll and move the cursor for any information, but not in the standard radios.

So, unless you have a large multimedia screen like in Pioneer DMH-WT8600NEX, a capacitive screen is not the highest priority if you are okay with the slower responsiveness and more complex navigation through all settings. 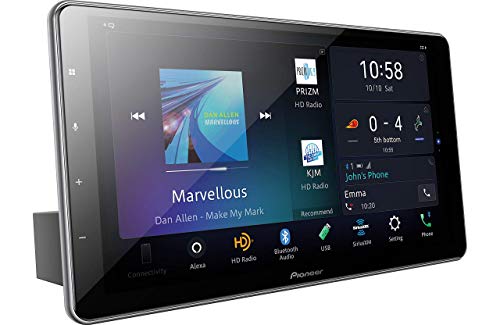 What Is Capacitive Touch Screen Technology?

The way of how capacitive screens work is very simple. When you touch the screen, your finger charges it slightly, and the screen’s controller detects this change in voltage through its electrodes.

You can compare them with small conductive springs placed on the whole screens’ surface.

In practice, capacitive screens have access only to the relative voltage changes, which are very sensitive to external interference and determine how much your finger moved across pixels.

Capacitive screens in the car radios have fantastic clarity and responsiveness, but the slightest touch can change the view since they are as sensitive as your laptop or a cell phone screen.

In some cases, you might want to use a stylus instead of your hand, but do you want to play with a plastic pen while driving?

What Are the Benefits of a Capacitive Touchscreen Car Radio?

Capacitive screens require much less pressure than resistive screens, making them better suited and easier to operate, especially for children and older people.

The screen looks brighter and with a higher contrast thanks to the fewer glass layers in front when compared to the resistive displays.

Also, and I think this is the most significant advantage, the capacitive screens are much faster to operate while scrolling the music tracks or the map. But again, this is because the movements are identical to the mobile phones.

On the other hand, capacitive screens require direct finger contact with the screen. In other words, it is difficult, or even impossible, to steer the radio while wearing gloves unless you wear special touchscreen gloves.

If not, you can apply to your gloves AnyGlove lubricate, and that will make them touchscreen-friendly.

How Does a Resistive Touchscreen Work?

Resistive touch screens have different from capacitive technology, and they do not work based on the electricity coming out of the finger touch impulses.

Resistive screens track the absolute value of pressure and move your finger in any direction along or across the screen surface so that resistive pads can provide additional information about the position of contact with higher accuracy.

Resistive screens measure total impact force because they have two layers separated by a thin space filled with a special conductive liquid that reacts to pressure changes.

The downside of the resistive touchscreens is that they are much slower to operate, and if you have a navigation system, its operation can be really painful.

What Are the Advantages of Resistive Touch Screens?

Like every other type of equipment, resistive touch screens have pros and cons, so let me show the key points.

The best part about the resistive radio screens is their price. Resistive touch screens are made in more cost-effective technology and are achievable even in budget-friendly car radios.

Another good thing about resistive touchscreens is they are flexible and less brittle than capacitive glass screens.

The most visible reason behind this flexibility is that the structure of resistive pads does not include glass at all.

That flexibility gives the screen an additional layer of protection from mechanical damages compared to the capacitive screens made from solid glass.

Which Touch Screen Has a Quicker Response Time, Capacitive or Resistive?

When it comes to the response time, the absolute winner is the capacitive screen.

It acts the same way as the mobile phone screen, so if you get used to fast scrolling, you will experience the same thing in your radio equipped with the capacitive screen.

Fast response in car radio screens is beneficial when driving and having only a fraction of a second to choose the different song or move the cursor on the map.

Responsive screens are much more difficult to navigate quickly, and in most cases, it requires you to pull over and change some settings.

The lifetime of resistive car radio screens varies depending on several factors, but the high-quality resistive touchscreens can last several hundred thousands of touches.

Resistive touchscreens will wear out faster, especially when you apply large pressure from the fingers because two thin layers of transparent conductive material with a narrow air gap in between them are not made to last forever.

So, if you use a lot of pressure on these screens, eventually they will lose responsiveness, and it often happens that resistive touch screens completely stop reacting to any finger touch.

What Are Drawbacks of Resistive Touch Screen?

They are still responsive, but you’ll have to tap or press the interface with greater force for a resistive touchscreen to recognize your input.

Resistive touchscreens usually offer lower display resolutions and lower contrast than capacitive touchscreens, so they are not the best option for a car’s multimedia station.

In addition to that, responsive touch screens are not very durable, and to me, they feel softer.

They are much more likely to get damaged than capacitive touch screens, so make sure to use the screen protector on your radio in the same way as you would on your mobile phone.

If you need a radio with a resistive touchscreen because it’s cheaper or does not have to be very sensitive or durable, or you live in a cold area and drive with gloves, then that’s okay, but otherwise, I wouldn’t recommend it.

Which Car Radios With Capacitive Screens Are Good?

As long as you do not wear gloves while operating the stereo and do not mind a higher price, there are many radios with capacitive touch screens on the market to choose from at any budget.

When looking at the single din radios, the number one with the capacitive screen is Pioneer DMH-WT8600NEX with its enormous 10.1″ screen. It has built-in all available features, and yes, it is expensive but well worth the price.

From double din radios, I would go for a smart Alpine iLX-W650 with a 7″ screen. 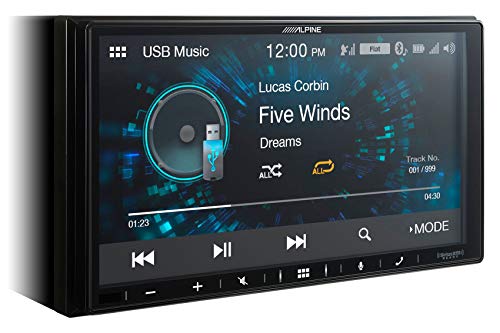 It is the most user-friendly, and in addition to the standard features, W650 is choosing which apps will be displayed based on their most recent usage.

This feature can be helpful for daily usage, and I really like it, but it can also be annoying if you share the car with other drivers who use different apps.

More of a budget option is the BOSS BVB9358RC, equipped with the rear camera and a DVD / CD player. If you are not interested in the DVD/CD, you may check its brother BOSS BVB9395RC with a slightly larger screen.

Which Are the Best Radios With Resistive Touch Screens?

The selection is larger for the radios with resistive displays, but I show you only my best picks.

The double din size radio that I have been using for a while and simply love it for its quality and functionality is the multimedia receiver Pioneer AVH-2400NEX. 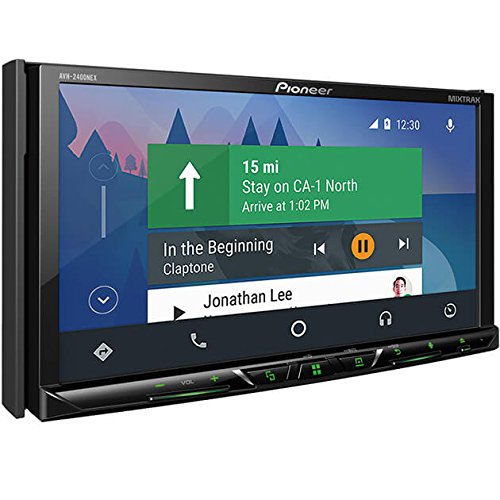 It does not have a high-resolution screen like the Pioneer DMH-WT8600NEX, but it is the best in the lower price range.

The Pioneer AVH-2400NEX head unit brings a massive selection of music sources like standard AM/FM or CD/DVD, but also it receives an HD radio, and it is ready for XM Sirius.

From the single din stereos with the resistive touch screens, I would pick Pioneer AVH-3500NEX thanks to its floating screen that you can hide when leaving the car and its ability to play DVDs.

The downside of this radio is using a USB wire connection for Android radio, but if you prefer Pandora or Spotify, you can use Bluetooth the AVH-3500NEX with your phone.

If you do not mind the constantly open screen and prefer a single din with a larger screen, check out Sony XAV-AX8000 with its nearly 9″ display. 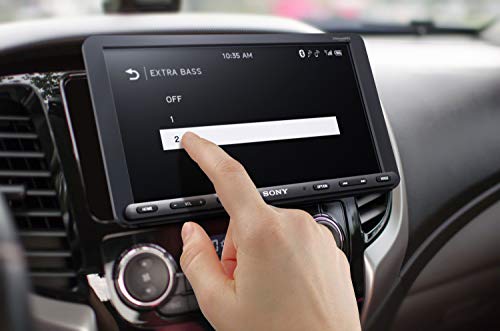 In addition to the larger screen, Sony has a built-in 10 band graphic equalizer and a more powerful amplifier than Pioneer what makes it a better option if you do not have installed external amplifier for the speakers.

Resistive screens are easier to see in sunlight, and they work with any stylus and gloved hands.

On the other hand, Capacitive screens offer exact recognition that includes even light touches or multiple fingers at once, such as the pinch-to-zoom feature. So, if you need something to watch the HD quality in your car, the capacitive screen is the right choice.