I don’t know about you, but I hate it when my car battery dies in the winter, and it stops me from enjoying the music.

Luckily, there are easy ways to avoid these problems altogether, but how should we keep the car battery from dying in cold weather? Let’s find out.

As a general rule, turn off all lighting right after parking the car. If you have a garage, park there overnight if possible, so the battery does not get too cold. Keep vents open for fresh air and close them when driving so that no warm air escapes out of the tailpipe, which will cause more gas consumption and eventually lead to less power in the battery.

Tip: If possible, keep the battery inside the garage during cold months, but not directly on the concrete floor.

Instead, place it on the piece of wood or a carpet, and connect it to the battery tender that will keep your battery in a usable condition.

In the article below, I will show you how to keep a car battery in good condition in cold weather and how you should charge the standard and Lithium batteries for car audio in cold weather.

Why Does My Car Battery Drain When It’s Cold?

A cold car battery is one of the most common problems when it comes to car batteries.

Car batteries usually go dead in cold weather, mainly because the damage done during the summer doesn’t show up until the battery is more forced to work, like in the cold weather.

A cold battery has reduced cranking power, which does not help turn the engine with thicker oil while freezing outside. This is even worse for driving only at short distances when the battery does not have a chance to be re-charged.

When the car is left uncharged for a prolonged period, the car battery gradually loses its charge and eventually goes completely dead after some time.

The car’s electrical components like radio, clock, and alarm system still use power from the car battery directly without any additional alternator charging. If all these devices remain active, they’ll slowly make the battery drain.

Do I Need a New Car Battery if It Dies in the Cold?

When a car battery gets frozen, the car won’t start or run. This is because a vehicle starts by converting chemical energy into electrical energy, so the vehicle will not start if this conversion doesn’t work well enough because of car battery got frozen.

A car battery that dies because it wasn’t fully charged will not automatically mean you’ll need to buy a new car battery, but you have to charge it to full and observe if it loses the charge over time.

If it discharges, it means that cells are faulty, and there’s nothing you can do about it except buying a new car battery.

In most cases however, regular charging will fix the problem as long as the car has been driven occasionally, at least once per week.

How to Charge My Car Battery in Cold Weather?

To charge the battery, you need an external car battery charger. I use NOCO Genius 5, the 5amp charger with temperature compensation that gives the battery an extra boost in cold weather.

The great thing about this charger is that it automatically maintains the battery once full and can help recover sulfated and stratified batteries.

NOCO charger also has a repair mode that is especially helpful when your battery has been flat for a long time. It may take the whole night to charge it, but NOCO will make it back to life. 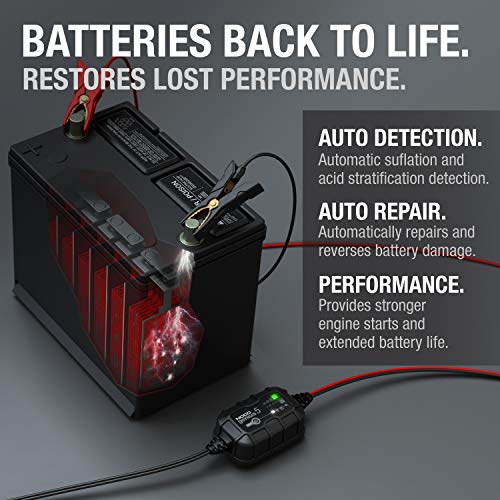 The important thing to remember when charging a flat battery is disconnecting it from the vehicle and having only the charger plugged into the battery terminals.

Also, make sure the battery terminals are not corroded because corrosion can stop current from flowing between two metal parts of your car battery system resulting in lower charging capabilities.

How Do I Protect My Car Battery From Cold?

First of all, don’t ever leave your car uncharged for more than two weeks without starting the engine at least every couple of days.

It’s crucial to make sure the car is in good technical condition before the cold season starts. Here are some tips you can follow to get the most out of your car battery during the cold winter months:

How Do You Keep a Car Battery From Going Flat in Cold Weather?

First of all, keep your car in a garage or any other warm place, especially during the winter months when cold weather is here. Don’t let the car reach the temperature where battery fluids start freezing. Usually, that happens around zero degrees Fahrenheit.

Until the engine reaches the working temperature, turn AC off or lower its intensity so much that the car’s battery can barely feel it.

Avoid unnecessary starting and stopping your car, especially during lower temperatures, because the battery has to work harder when it is cold every time you do that.

If you can, drive through the community or to the grocery store at least every couple of days. Regular driving can keep your battery exercising and ready.

But as soon as you notice that the battery struggles to crank the engine up, charge it to complete. If charging does not help, it may be a sign that you need a new battery.

How Do I Store My Car Battery in Cold Weather?

Car batteries are not bulletproof, and their charge does not last forever. Even the best and most expensive AGM and gel cell batteries may succumb to prolonged storage, especially during the winter. And when a car battery is idle, it will naturally discharge.

When you want to store your car battery during cold months, you have to disconnect it and remove it from the car.

Ideally, if the battery is stored in a cool and dry place. The optimal temperature for keeping a car battery is above 59-degrees F (15-degrees C), so the closed garage should be a good place.

For continued storage, which may last three months or more, you’ll ideally want to use a battery tender, but do not confuse it with a charger.

Battery tender, when connected, keeps the current of the minimal amperage flowing through the battery, keeping it in a good stable condition. Without it, you risk permanent discharge of the battery. 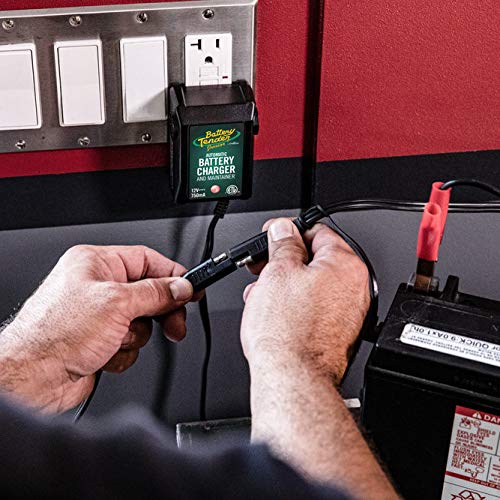 Is It Bad to Leave Car Lithium Batteries in the Cold?

Lithium car batteries rely on chemical reactions to work, and the cold (especially extreme cold) can slow and even stop those reactions.

The car’s lithium battery will have an optimum performance when the vehicle is used every day, but if you do not drive it for several months, it can be harmful to the lithium battery when kept in the cold.

The reason for this is that there is already some self-discharge of the battery even while it’s not being used, so after a few consecutive months of disuse, you might notice your car having issues starting up the engine.

Since cold conditions drain batteries, you’ll need to charge them more often. Unfortunately, charging them in low temperatures is not as effective as doing normal weather conditions.

While lithium-ion batteries handle cold weather better than most battery chemistries, too low temperatures may still reduce their ability to store and release energy.

It’s recommended to charge lithium car batteries more often during winter months, though, because of its increased self-discharge rate caused by the cold weather.

Are Lithium Batteries Damaged by Freezing?

Lithium batteries, although they can handle lower temperatures better, they are still susceptible to freezing. If the car battery freezes, it could permanently damage it because cracks could appear in its casing or internal plates.

However, if your car’s lithium car battery does freeze, you should never use water to unfreeze it because this can cause internal problems.

Instead, bring the car battery near a heat source until it becomes warm enough to start charging again.

Can You Charge Lithium Batteries in the Cold?

To charge a lithium car battery, I use the CTEK (56-926) charger that is fully automatic, and it maintains the whole charging process by itself.

The Lithium CTEK (56-926) charger not only charges the battery but also regulates the charge in such that it will charge to about 100% and will repeat the cycle to maintain the charge.

I am really happy with this charger, mainly because it allows me to leave the battery plugged for a couple of months, and I know it will be maintained properly at a stable voltage level.

How Do You Keep Lithium Batteries Warm in Cold Weather?

Cold car batteries are one of the biggest issues in cold countries. Lithium car batteries differ from other car batteries due to their much higher energy density, and it’s harder for them to survive when the weather is cold.

You can do a few things when keeping the lithium battery in the cold weather, and my favorite is to have a car parked in the garage with the battery covered with a thermal blanket.

The blanket around the battery has to be connected to the wall plug, but I do not have it powered non-stop.

I have it connected to the digital timer, with activated warming two times during the night for an hour. This way, the blanket applies some temperature to the battery and prevents it from freezing.

The car battery performance is better when you run the car often because the battery will slowly discharge when not in use. Therefore, it’s best to drive your vehicle for short distances a few times a week. This way, you’ll keep the battery fresh and ready for action.

If the car battery goes completely dead and cannot crank the engine, have it charged or replaced ASAP.

If the car has been sitting for a long time without any movement, the car battery might be frozen and unable to take any charge.

link to Can You Use Any Battery for Car Audio?

Factory-installed car batteries are designed to power serial car stereo and other standard electrical components of the car. If you plan to install a powerful stereo in your car or upgrade the...

Continue Reading
link to Do I Need an Extra Battery For a Car Audio System?

There are millions of cars with installed car audio amplifiers, but do they need a separate battery for car audio? I did detailed research and want to share with you what I learned about batteries...