Car speakers and their corresponding amps and radios love to break right before a family trip. If it happened suddenly, that’s probably due to a damaged fuse. But do car speakers have fuses?

In general, car speakers do not have fuses. Fuses are installed on the amplifier and car stereo wires. Therefore if a fuse blows, the whole audio system stops working. Replacing the fuse in the car’s fuse box and amplifier will fix the issue easily.

Tip: When your fuse blows out often, do not replace it with the bigger one. That could permanently damage your car stereo or amplifier.

If you do not have a fuse with the needed amperage, check out CrocSee Assortment Kit on Amazon. This set has all range fuses, not only for the car audio but for the entire electrical system in your car.

In this article, I will explain how to change the fuses in your car amp and the fuse box and tell if your fuse is blown in the first place. I will also tell you how to buy the correct fuse for your car amp and fuse box.

How to Change a Fuse in the Car Audio?

There are two fuses that you need to change to make your car speakers work again.

You can find one fuse for the car stereo in the fuse box. The other fuse is on the car amplifier itself. Make sure to check both.

Changing a Car Stereo Fuse in the Fuse Box?

Replacing a blown a fuse with a new one in the fuse box is pretty straightforward. Here is how you do it:

You can check your car’s manual, but most fuse boxes are located below the front passenger’s seat, in the trunk, or next to the car battery under the hood.

Take out the fuses one by one and carefully inspect them to see if the wiring inside is broken.

Make sure the fuses have the same amp rating.

How to Replace a Blown Fuse in the Car Amplifier?

All cars must have a car amplifier that boosts the signal going from the stereo to the speakers.

Terry Miller from Edmunds explains that the signal going to the speakers must be powerful enough to move the cones to create sound.

Here is how you change a fuse on your car amp:

Your car’s amplifier is usually installed in the trunk or somewhere under the dashboard.

Most car amps have only one fuse, so this shouldn’t be too much of a problem. It may look slightly different from the fuse box, though.

Replace the Blown Fuse With a New One.

Like with the fuse from the fuse box, you must use a fuse with the correct rating.

If you have an aftermarket car amp, you can find the amp fuse inside a fuse holder on the cable between the car battery and car amp.

How Can I Tell if a Fuse Is Blown?

Another giveaway is that the plastic part of the fuse is burned, discolored, or melted. In most cases, you’ll notice the metal blades have turned brown as well.

Thankfully, fuses are very cheap and easy to replace.

In general, it’s a good idea to always keep a few fuses with different amp ratings somewhere in your car should you need them in a pinch.

There are several types of car fuses, but the most basic one is the blade fuse. They come in a few different sizes, so that’s the first significant difference.

When searching for a selection of the fuses for the stereo and the rest of the car’s electrical equipment, check out the CrocSee Assortment Kit on Amazon. It contains 250 fuses with different amp ratings and sizes, so you’ll always have a replacement ready. 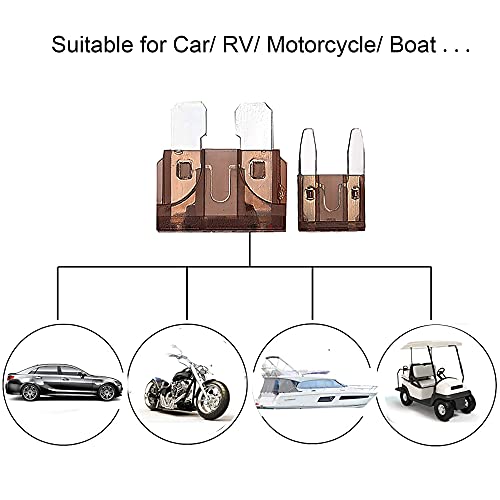 If you installed the new car amp yourself, you most likely used a fuse holder like the Carviya 4-8 Gauge. This AGU-style fuse holder looks quirky, and the transparent plastic lets you check the fuse at a glance.

These in-line fuse holders are entirely different from the standard blade fuse design, but their function is the same.

If there is too much current passing through the fuse, it burns the filament inside to protect your speakers.

Together with the blade fuse, here are some other types of fuses found in fuse boxes that you can buy for your amp on Amazon.com. From all three below, I prefer the AGU fuses.

Do I Need an Amp Fuse?

You do need an amp fuse, just like the A/C, and power windows need to have fuses. If the amp doesn’t have a fuse in the fuse box or between the battery and the amp, a short circuit will damage your audio system. Moreover, the car could catch on fire.

The car amplifier is arguably the most power-hungry part of your entire car. So, install a fuse with the correct amp rating.

If your amp doesn’t have a fuse at all, installing a fuse holder between the battery and your amp is easy.

Here is a short video by Quality Mobile Video explaining how to do it:

Car speakers don’t have their fuses, but they are connected to the amp and stereo, both of which have fuses.

The car amp has the fuse directly inside of it or inside a fuse holder. And your stereo is wired through the fuse box, so make sure that there are no blown fuses there as well.

Your audio system needs to have all fuses in place to protect your expensive speakers from short circuits. You can quickly tell what fuse you need by looking at the color of the fuse or by reading the number on the fuse.

Grainews: How to identify blade fuses

AskingLot: How much power does a car amp draw?