You can use a car radio and other electrical components without starting the car. But, does a car radio use battery to run? Let’s find out.

As a general rule, the car radio uses the car battery and can drain its power if you use it without starting the car’s engine. The louder it plays, the more it drains the battery’s power, no matter whether the battery is new or old.

Tip: The best way to use a car radio is when the engine is on because the alternator is recharging the battery simultaneously.

If you prefer listening to your radio and keeping the engine off, you can connect the battery to the standard charger and keep it charged for the whole time.

Although this may be difficult when you are outside, you can listen to your radio at the drive or in the garage without any risk of having the battery drained.

If you have a Lithium battery, you cannot use the standard battery charger, but specially designed for Lithium batteries. For example, a great charger is the NOCO Boost Plus GB40.

How to Power a Car Stereo With a Battery?

Connecting a radio in the car is straightforward, and it does not require any special tools.

However, when you want to power the radio outside the car, you can use any 12 Volt DC source:

Below are a few steps of how to power a car stereo using a car battery:

These simple connections will power up your stereo. If you are using a DC adapter, you have first to figure out the positive and negative wires of the adapter, and then you can connect the radio at home.

How to Listen to the Radio Without Draining the Car Battery?

As I mentioned earlier, to maintain a battery lifetime, you should listen to the car radio only when your car engine is on.

There are, however, situations that you have to use the radio without starting the engine, but how to do it?

In these cases, you can follow the tips below to lower your battery drainage significantly.

Will Running the Radio Kill the Battery?

Imagine your car battery is like a water tank and the car radio is like a tap to understand this concept.

When you open the tap, it will drain all the water from the tank, and after some time, your tank will be empty. In the same way, the radio will drain your battery.

Running a car radio for an extended time will kill your car’s battery, and your car will refuse to start afterward. The time taken to fully discharge the car battery depends on the battery’s condition and the type of audio components you are using with your car stereo.

If your car is old, before the 1960s, your car radio will demand a significant amount of energy, and your battery will not last long.

Even in a modern car, if the stereo system has too heavy woofers and speakers, they drain your battery faster. On the other hand, if your car battery is new, it tends to stand for longer than older ones.

How Long Can I Play Car Radio Without Draining the Battery?

In general, car radios do not use much energy, and you can play them for five to six hours without starting your car’s engine.

The actual amount of time depends on the type of stereo you are using in your car, the condition of your car’s battery, and the use of other vehicle features that consume the electricity.

The double-DIN radio consumes more power from the battery than the single din because they have a touch screen, and when you are playing video on a double din radio, the light always stays ON, which drains the battery faster.

The car audio components like speakers, woofers, and amplifiers play a significant role in determining when you can play a car radio without fully discharging the battery.

The more hungry audio components, the greater the power required for their operation, which means our battery drains rapidly.

The latest car radios have a reputation for being more energy-efficient than the old ones. But if you don’t install your radio correctly, it will make your battery life shorter and less powerful in comparison to other cars on the road with newer radios installed.

You can listen to the radio for hours without any problems if your battery is new, but older batteries tend to discharge early. If your car battery is old, it is good to listen to the car radio when the alternator is on. Otherwise, you’ll have no choice but jumpstart from another vehicle!

How Can I Keep the Radio on When the Car Is Off?

It’s always nice to listen to the radio while washing your car, waiting for someone in parking or standing at traffic lights, etc.

However, many people don’t realize that they don’t need to turn on the engine to listen to the radio. Every car with the key or keyless has three modes – ignition, accessory, and start.

If you are using a key car, turn the key to a few clicks (to accessory mode), and your radio will turn on without starting the engine, but in the case of keyless cars, this is tricky as some luxury cars do not use keys.

When the car engine is off in a keyless car, put the leg on the brake pedal and push the start/stop push button once.,Your radio will turn on. When you press the button again, the radio will turn off.

There are different ways of keeping your radio on, depending on the car model. Below I explain the most popular methods:

Back then, there were not many keyless cars, but people loved the idea of just pushing a button to start and stop the vehicle.

When you push the button, your engine will start, and when you press it again, the engine will shut down. Along with it, all other car accessories also turn off.

As time changes, the technology in cars upgrades, and the method to keep the radio running while the engine is off is also different.

When parking your car, you have to shift gear into “park” mode while the engine is still running. As the vehicle enters park mode with your handbrake activated, push down on the brake pedal and shift to neutral.

Now remove the foot from the brake pedal and press the start/ stop button once. It will turn on the accessory mode, where you can listen to music or charge your phone without using gas.

If you want to turn off the radio, then release your foot from the brake pedal.

In these models, you have first to put the car in accessory mode and turn on the car radio.

To turn the radio on in these models without an engine, push the brake pedal and simultaneously press the start/stop button.

This will turn on all the accessories, including the car radio, but the engine will be off. Now press that push button again to turn on the radio while all other accessories are off now.

The method to keep the radio on without turning the engine on in these cars is simple. When your vehicle is in park mode, both the accessory and engine are working.

To start the car again, push the brake pedal and press the start/stop button. Your vehicle will start again but make sure to have a gear stick in the neutral position. It is also worth pushing the clutch pedal every time you turn the engine on.

Can I Charge the Battery While Listening to the Car Radio?

Whenever you use any car component that derives its power from the battery, you discharge the car battery.

You can charge the battery while listening to the car radio and the best way to do it is to start the engine. This way, the alternator will recharge the battery, and you can listen to music without draining the battery.

If you want to recharge the battery without the engine, connect it to the charger and plug the charger into the wall socket.

Charging the battery often takes a while, depending on how discharged it is and which charger you use, so the best way is to use a high-quality charger leave the battery charged overnight. 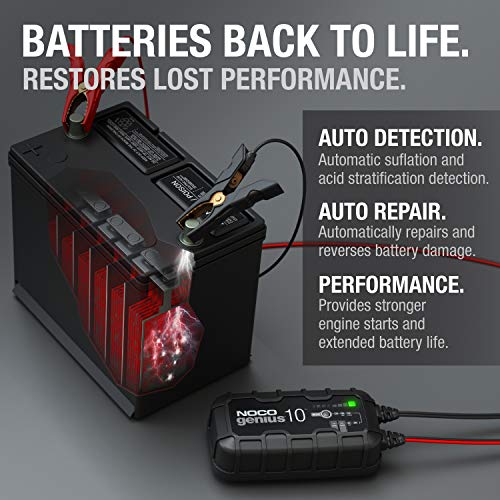 If the battery you are using is new and healthy, and your car’s stereo does not have hungry woofers and speakers, you can listen to your radio for hours.

Although, it is advisable to start the car first for 20-30 minutes before listening to the radio because it recharges your battery.

To protect the car battery, always check that headlights, ac, fan or heater are turned off before leaving the car.

If the car battery goes flat, you have to jumpstart it, or if your car is keyless, you need a smart charger to charge the battery.