Not long time ago, after a car wash, I noticed that water was leaking from the roof antenna.

I had to fix it quickly, and the first question that came into my mind was, “How can I fix a leak in the car antenna?” Well, let’s find out.

In general, the first thing you have to do is remove the car antenna from the roof. Then clean the whole area, check the rubber gasket and replace it if worn out. The last thing to do is apply a thin layer of a good sealant at the point where the gasket touches the car roof.

Tip – When a car antenna is leaking, this is not an end of the world, but it is annoying, and the last thing you need in your car is rust after some time.

Or more, the leaking water can damage electrical circuits and upholstery. If water sits under the carpets for a long time, then molds can also grow, which leads to an unpleasant odor in the car.

Although antennas are not too expensive, I would rather try to repair them and not replace them right away. In most cases, it works, but you have to make sure that the connection point with the chassis is sealed.

The good sealants I recommend for any car repairs are either Permatex or Tiger Seal if the repaired area is larger.

In the article below, I will explain different ways of fixing leaks in car antennas.

Why Is My Car Antenna Leaking Water?

The factory-installed car antennas are correctly sealed to avoid any leakage from the car roof. However, since the antennas are mounted outside of the car, it is vulnerable to accidents.

Due to heavy rain, snow, storms, or during a car wash, the antenna’s base can get displaced. The contact between the rubber gasket and the roof gets loose, allowing water to come in between. This further leads to rusting of metal parts and causes water to leak through the antenna hole.

Another reason for leaking car antennas is that the deteriorated rubber gasket rubber. The best way to fix it is to replace it with a new gasket.

Sometimes antennas start leaking right after incorrect installation. The solution is to remove the antenna, fill it with the sealant and then reinstall the antenna.

How to Fix a Water Leak Through a Car Roof Antenna?

There are two reasons for water leak through car antennas – the gasket rubber seal is damaged or the sealant filled has lost its adhesive power.

Let’s look at them one by one.

Many OEM seals are made from poor-quality rubber that can quickly deteriorate or crack over time, and this failure leads to leaking problems at the antenna connection.

It is not always easy to see the damaged rubber with a naked eye, but when you have water inside your car, you can quickly tell where it is coming from.

Always purchase a new gasket of the same size as the old one. For this, you should measure the antenna base and see what size fits into it.

Below is the step by step process to fix the base rubber gasket seal of the antenna:

Another cause of car antenna leaks is that the sealant has lost its adhesive power. If this happens, you have to refill the sealant.

Depending on where your antenna is mounted, you can remove it and refill the base with silicon-based waterproof sealant.

Below is the step-by-step process to fill the sealant in the car antenna.

Do I Need to Replace the Leaking Car Antenna?

It is terrifying to see water leakage from the car roof. It has many potential pitfalls, like the car electrical system is at the risk of a short circuit.

In some cases, also the antenna can get rusty, and because of that, you may need to replace it.

There is no need to replace the whole leaking car antenna unless its parts are working correctly. Unfortunately, sometimes not only the gasket can be damaged, but also either nut or the antenna wire. In these cases, replacing the damaged parts helps you in saving money and time.

The radio antenna is usually mounted at four different locations

The replacement process may vary for different antenna types, especially for the self-extending antennas, where additional power wiring is required.

If you hear the motor running when you start the car, but the mast is broken or does not go up or down, you can repair the antenna by replacing the mast. But because new antennas are not too expensive, I would rather replace the whole unit.

If however, you still want to replace the broken mast in the antenna, the steps below will drive you through this process:

However, if the car antenna motor is not working even after turning on the engine, it needs to be replaced with a new self-extending antenna.

Shark fin antennas are the most popular vehicle antennas because of their small size and ability to boost AM/FM signals, satellite radio, and GPS of your car stereo.

Shark Fin Antennas come with large rubber bases that are adhesive to the car’s roof.

Although there is still a need to drill the hole for the wires, shark fin antennas have a much more stable connection with the car roof, and there is a limited chance of water leaking into the vehicle.

Before buying any shark fin car antenna, make sure your new antenna size matches the older one.

My favorite is the Possbay Shark Fin antenna. It is a universal mount car antenna made from high-quality paint technology, it is easy to install, self-adhesive, and it has wire surrounded by rubber, making it waterproof.

Here are some of the great benefits of using shark fin antennas over other antennas: 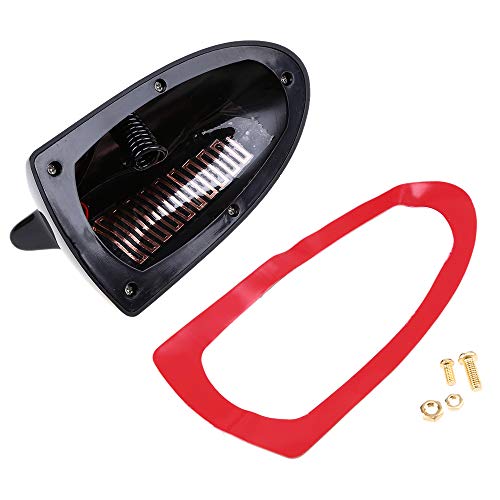 Long gone are the days when you had to make holes to mount car antennas.

With advancements in technology, many cars use shark fin antennas because they are easy to install and perfect to repair any existing damaged antennas.

They have a self-adhesive rubber base that sticks to the car and protects the inner circuits from water. Some of them come with two screws in which you have to drill just two small holes for screws and one for the wire passage.

Shark fin antennas are highly reliable as compared to other antennas. They have higher gains that improve radio communications and GPS navigation of the cars.

Shark fin antennas are convenient, sleek, and have an aerodynamic design that prevents damages, even after frequent visits to the car wash. In addition, they have an IP67 rating which makes them weather and water-resistant.

How Do You Seal a Shark Fin Antenna?

The shark fin antenna contains electronic components like a tiny amplifier that amplifies the radio signal before transmitting it to the head unit.

A small gap between the antenna and roof, especially if a roof’s shape does not match the antenna base, can cause the water to enter through slight gaps and damage the electronic components.

Below are a few steps to replace a shark fin antenna on the roof:

How to Remove the Shark Fin Antenna From My Car?

Removing shark fin antenna is not a complicated process. You can do it easily at home with just a few simple tools like a wrench, screwdriver, etc.

The Shark fin antenna is tied onto the roof with a nut. To remove it, you have to pop the headliner out and untie the nut that holds the shark fin antenna with a wrench.

The shark fin antennas are often mounted at the backside of the roof, so it’s better to drop your back seats while removing them to get better access to the wiring from the inside car.

Follow the steps below to remove the shark fin antenna from the roof:

It may sound easier than while doing this, and you have to be careful, especially with the headliner, and not damage it.

Although headliners are flexible, do not bend them too much, as they may bend too much and break.

A leaking car antenna can collect dust, cause corrosion on the car’s roof, and is dangerous for car accessories.

The good news is that it can be repaired at your own home using sealants and gaskets that block the holes. However, if the problem is severe, then you should seek professional help.