A car fuse is an overload protection device.

If the fuse of the car radio blows, then the radio won’t turn on. But, how to replace a car radio fuse? Let’s find out.

Tip – Fuses must protect all car audio equipment from any damage caused by a short circuit or other faults in the car electrical system.

If you are looking for a fuse to replace, check this set on Amazon.

This set includes 272 fuses in the amperage from all in the range from 2A to 35A. I bought it a few years ago and have been using it since then without a single issue.

In the article below, I will show you how to check if a radio fuse is blown and also show you the types of fuses available for the vehicles.

How Do I Know if My Car Radio Fuse Is Blown?

The most common reason why your car’s electrical components stop working is a blown fuse.

A vehicle fuse contains a thin wire which melts if the current in the circuit increases spontaneously, thus breaking the current path and protecting the device.

If your car radio refuses to turn on, the most probable cause is that its fuse blew up and you have to replace it. If the wire inside the car radio fuse is melted, you can say that the fuse is blown.

To know why a fuse blows at a higher current, let’s go back to what you studied in your high school physics class.

Every metal has a melting point which means if it is heated above a specific temperature, it gets converted from a solid to a liquid state.

Joule’s law of heating states below:

Where I is the current in amperes,

R is the resistance of metal and,

t is the time for which current flows.

According to this equation, the heat produced in a conductor is directly proportional to the current (amperes) passing through that conductor.

Due to a short circuit, the current in the system increases abruptly, causing the temperature increase of the fuse wire.

As the temperature reaches above the melting point of fuse wire, the fuse wire melts, and your radio is protected from damage.

A blown fuse indicates that there is something wrong with your vehicle’s electrical system.

It can be a short circuit caused by contact between positive and negative wire or power wire contact with the ground.

How Do You Check if a Fuse Is Blown?

Fuses are used for the safety of electronic components in your car. A car has many fuses to protect different electrical components. The first step is to locate and check the fuse which is blown.

If the fuse is blown, then the wire intact between its two blades is broken. There are various ways of checking whether a fuse is blown or not. For example, you can check the blown fuse with the naked eye, use a multimeter or a fuse tester.

Below I will explain a few ways of how to check for blown fuses.

If you don’t have a multimeter or a fuse tester, you can check blown fuses by this method. First, remove the fuse from the fuse holder and hold it against the light.

If you notice a thin wire connecting one blade to another, the fuse is good. Otherwise, it is blown. In some cases, you will see black color around the fuse, which indicates that it is burnt.

However, I don’t recommend this method because it is less accurate, and sometimes the wire is so thin that it can easily be neglected. It also does not work with not transparent fuses or these covered with dust.

Electrical tests are the best way to check blown fuses.

This is the most accurate method to check blown fuses. When an electrical fault occurs in the car, it may blow one or many fuses.

You can detect the blown fuses using a high impedance digital multimeter.

In this method, turn the ignition on and measure the voltage between the fuse terminal and ground without removing the fuses from the fuse block.

This method measures the voltage drop between the fuse terminals without removing it from the fuse block. Here is how to do it:

This method is simple and should be performed when the car engine is off to test the removed fuse:

Some auto part stores sell car fuse testers like this one, which can instantly check a car fuse’s condition. 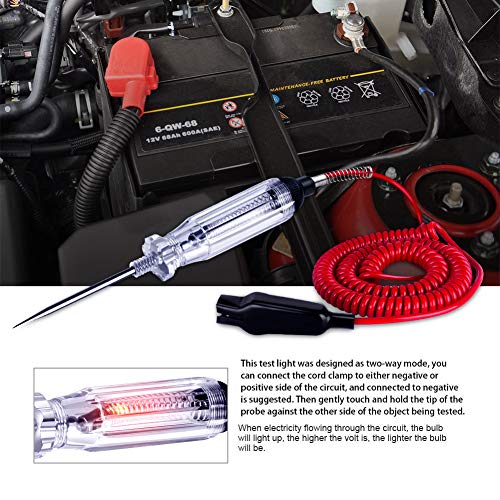 You just have to touch the probe pins to the fuse tester, and if the fuse is good, an LED light will turn on. However, if the fuse is damaged, then you will not see the light.

Where Is the Fuse for My Car Radio?

Except for the radio fuse, which you will find on the backside of the stereo, all other car fuses are placed in the fuse panel.

You will find the car fuse panel on the driver’s side dashboard or under the dashboard. In some cars, you can find it under the hood in the engine compartment.

The fuse map on the fuse panel cover describes the purpose of each fuse and its amperage rating.

Can I Fix a Car Radio Fuse?

You can fix a blown car radio fuse, but it will be only a temporary solution. Do this only when absolutely necessary, and remember that applying too large wire will drive too much current. Too much current can permanently damage your car’s equipment, so do not mess with your car’s electrical system unless you know exactly what you are doing.

Sometimes your car radio fuse blows unexpectedly, and you do not always have a spare fuse in the dashboard. In this case, you have only one option left, and that is to fix it.

Take a copper or aluminum wire and wrap it around the pins of the fuse. This will complete the circuit, and you can use the fuse again.

Blade fuses are commonly used in cars, and here are the step-by-step instructions to fix a blade car fuse.

The repaired fuse wire will work fine, and it will melt if the current in the circuit increases suddenly to a very high level.

Fixing a car fuse using this method is a temporary solution, and you should replace the blown fuse with a new one as soon as possible.

If the fuse is repeatedly blowing, there is some electrical fault in the circuit, which gives rise to overcurrent.

In this situation, you should go to the electrician, and he will diagnose the actual fault.

Remember, the blown fuse is an indicator that something is wrong with the electrical system, it is not a problem on its own.

Which Fuse Is Good for Car Radio?

Ideally, you can find the fuse rating recommended for car radio in the radio installation manual.

The best for car audio and most often used in cars are the blade fuses. Low power car radios use 20 amp blade type fuses, whereas if your car radio is more powerful, it can have installed a fuse with an ampere rating ranging between 25 – 30 amps.

Remember never to use a fuse of higher amperage because it may cause damage to your car’s component.

For example, if you replace a 5amp fuse with 20amp, then it will cut off the circuit at 20 amperes. Therefore, the equipment you are trying to protect may get damaged with that amount of current before the 20A fuse blows.

On the other hand, if you choose a fuse of low rating, for example, 2amp, it will blow off before the current reaches the required value at 5amp.

There are four types of car fuses available in the market.

They were introduced in the 1970s, and you will find these types of fuses in every car.

The color-coding of these fuses represents their ampere rating. However, the ampere rating of each fuse is also written on the top of the fuse. 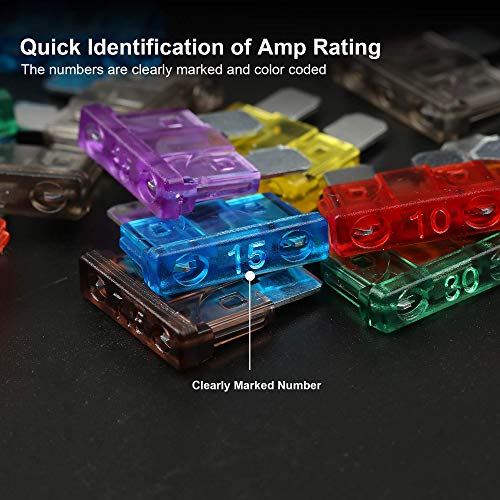 There are six types of blade car fuses used in automobiles

They are specially designed to work with 12 volts battery, ranging from 1 – 40 am.

They provide low voltage drop and increase time delay to cut off the circuit to safeguard high current circuits.

Cartridge fuses are classified into three groups, and their amperage rating is from 15 to 60amp:

Pal fuses you can find mainly in cars manufactured by Japanese producers. They are rectangular-shaped cartridge fuses with an ampere rating ranging from 20 amp to 120 amp.

They are also color-coded, which makes them easier to identify.

Circuit breakers can be reset manually or automatically to regular operation, and unlike fuses, you don’t have to replace them every time.

Some manufacturers use circuit breakers for electric motors, cooling fans, or aftermarket car stereo, which draws excessive current during starting.

Other than the fuses types mentioned above, there were also used glass fuses in older cars.

So before replacing the car fuse, make sure to check its type and rating.

How Much Does a Radio Fuse Cost?

Nowadays, car fuses are of high quality and do not require frequent replacement unless blown by too much current in the circuit.

The cost of replacing a car fuse ranges between 5$ to 20$, and the cost of the fuse replacement depends on the type of fuse you are going to replace, the model of your car, and power requirements.

If any electrical component of your car fails, then the first thing you should check is the fuse. This will save your trip to the car electrician.

However, you should consult an electrician for professional installations like upgrading your car stereo, and your car stereo needs a fuse of higher ratings.

The replacement of a car fuse is easy and can be done without professional help.

A blown fuse is just an effect of overloading the circuit, and the underlying cause can be a short circuit or fault in the component. So always try to cure the cause of fuse failure.