You can enjoy listening to your car radio without worrying about draining its battery while the engine is off.

As a general rule, to keep the car radio running without draining the battery, you have to Turn off all the lights, fans, AC in a car and run the engine for a while before turning it off. It is also handy to disconnect sub-woofers and amplifiers from the radio or use a portable radio.

Tip: Keeping your radio on with the engine off will not drain its battery as it only uses a small current. This way, you can keep the stereo on for hours without having any problem.

Bear in mind the amount of time you can keep the radio on while the engine is off may also depend on your car.

Some, especially older cars, may require extra power to start the radio, so if you decide to replace the battery with the new one that may be stronger and more suitable for the car audio system, try the Red Optima.

In this article, I will explain how to leave your car radio on without draining the battery and how to extend car battery life while enjoying the nice music.

How Long Can I Play the Car Radio Without Draining the Battery?

Many can tell that it really depends on your car, and in many vehicles keeping the radio on even when the engine is off can drain your car battery.

However, the radio alone does not use much of a battery, so if your battery drains while listening to the stereo, it might be triggered by other things such as fans, lights, and heater.

Of course, the power your radio is using depends on the car’s audio equipment, and if you’re using a power-hungry subwoofer, expect the battery to drain quickly compared to when you’re only using a standard car stereo.

Also, if your radio has a large screen and you fiddle with it a lot, the battery can drain faster.

As general knowledge, if your car battery is healthy, you won’t experience any trouble even if you leave the radio on for a few hours. You can play the radio for at least 10 to 15 hours with newer cars without draining its battery, but to keep it for that long, you should shut off the lights, fans, and heaters.

In other words, there are many factors at play to determine how long you can leave the car radio on. These include electrically draining devices, the state of the battery, and your car.

Taking the vehicle to the mechanic regularly will allow you to keep the battery in good shape for a longer time. Also, if you want to save the battery lifetime, it is smart to use a portable radio.

What to Do if the Car Battery Died While Listening to the Radio?

The best way to deal with a dead battery is by jump-it. You’re going to need a jump starter or jump wires and a car with a functional battery to recharge your battery. 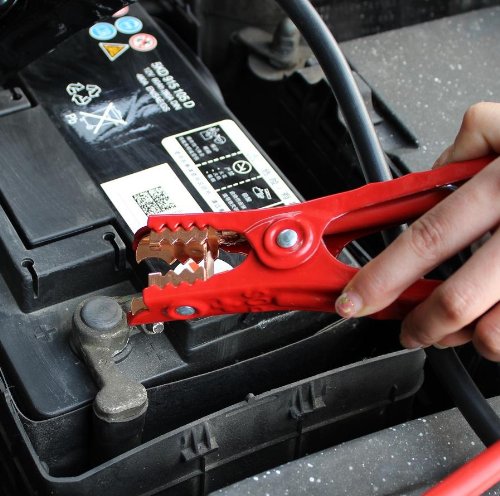 If you have a jump starter, you can use it anywhere you are, but to start the engine with just the wires, you need to follow the steps below:

Another thing you can do is drive around the car to give the battery a reasonable charge. An hour or two of steady driving can recharge the battery.

Another way to revive your car battery is to use Epsom salt or distilled water. Surprisingly, it works because Epsom salt helps tip the chemical balance to restart the battery.

Distilled water can fully submerge the plates, which can gain reaction giving the engine a few turns.

What if the Radio Stops Working After Recharging the Car Battery?

First off, do not panic. Fixing this is easy, but first, you have to identify what causes it.

Here are the most common reasons for this car radio problem and basic troubleshooting.

Incorrect jump-start procedure can damage the electrical components of the vehicle. So, make sure to hook up the cables correctly when you jump-start the car.

Car radio features can be corrupted when the power is returned. For example, some car radios may need a radio code to restart them. If your car has this feature, you need to enter the code and reset it. Look at the owner’s manual for guidance.

Issues on other components

Another reason your radio has stopped working after recharging the battery could be some trouble with the speakers, antenna, and wiring. Again, you can fiddle with it a little bit, but you may need to ask a mechanic for support in some cases.

Dead car batteries are common issues, and knowing some tricks on how to revive them and learning to leave the car radio on without worrying about killing off the battery is a valuable skill.

Does ACC Mode Drain Your Battery?

Before diving deep, ACC stands for accessory mode. It is the second position that you can find on the ignition switch.

If your car is on ACC mode, it switches off the other electrical components such as power windows, lights, and stereo.

ACC mode may or may not drain your car battery depending on the electric components you are running, but there is one thing you have to remember:

If you leave the car on ACC mode and every electrical component is switched off, the battery can run for hours. However, if you leave the radio on and the headlights, expect the battery to drain quickly, and in the end, your engine won’t start.

If your engine is new and the other components are running optimally, you can expect your car battery to last two hours or more with the radio on.

On the other hand, your car battery could drain in 30 minutes or less if you’ve got an advanced system that needs a lot of power.

Some cars have a battery that drains faster because they’re designed so that components like radio and lights shouldn’t be used when the vehicle is not in motion.

As for the question… is it bad to leave your car on ACC mode?

Nope, it isn’t! In fact, if you’re keen on fuel consumption, ACC mode is good. You can use the radio running and charge your phone while relaxing inside the car.

But really, ACC mode will not kill your battery unless you switch several electric components and forget to charge the car battery.

Potting your car on the ACC mode is not difficult, but to do it right, follow the steps below:

The few steps below can help to extend the battery life in your vehicle despite listening to the radio on ACC mode:

These few hacks can significantly help extend your car’s battery life allowing you to listen to the radio for a few hours while the vehicle is on ACC mode.

How to Avoid Draining the Car Battery While Playing the Radio?

Car batteries do have a limited lifespan, and there’s a pretty big chance that’ll run out while you’re enjoying the music on the stereo.

On average, a car battery can last up to three years, depending on certain factors. So, here are ways to extend car battery life to avoid cutting off your enjoyment while playing the radio:

Bear in mind that a dirty battery can leave a discharge across the grime on top of the casing, creating a mild short circuit. This can also flatten the battery.

To clean your car’s battery, use an old toothbrush dipped in baking soda and water mixture to scrub the terminal.

Dry the battery by spraying the surface with cold water and rinse it afterward with a clean cloth.

Check Your Battery’s Health at Least Once a Month

A healthy, fully charged lead-acid battery is at 12.7 volts and above. It is a good idea to keep the battery at this voltage level and to do it, you can use a voltmeter. If the voltage drops down, be sure to recharge the battery as quickly as possible.

Knowing your car battery’s life status is important to keep it from running out while you’re listening to the radio. Below are some tips on how to extend the battery’s life.

It’s not strictly true that cold weather kills car batteries. Car batteries may have to work harder to start the engine during the winter months.

The reason why you’re having trouble restarting the battery in cold months may be due to the sustained heat during the last summer. So, if you can, park your car in the shade or the garage while not in use. This way, the battery will be insulated.

If possible, keep your interior lights, heaters, and fans off while the radio is playing.

One thing you want to avoid is a parasitic draw, as it also drains the battery. To do it, make sure to turn off your trunk, glove box and have the door fully latched and closed before leaving the car.

If your car battery is not fastened correctly, chances are, your battery’s internal components can be damaged due to excessive vibration. This will create short circuits reducing battery life, and in some cases, it can even make the battery entirely damager and unable to work.

It is vital to use an approved battery clamp to ensure it’s held down properly at all times, but do not make a mistake by over-tightening the clamp because it can damage the battery too.

To sum it all up, you can put your music on full blast without worrying about draining your car battery. Just keep in mind to turn off battery-draining components if possible to enjoy a more extended music session while inside the car.

In theory, you can leave your car radio nonstop for hours if the battery is in good shape. But that depends on the radio system you use and all electronic components running in the car.

If you feel like your car’s battery keeps on draining unexpectedly, it is best to ask a mechanic to give it a quick check.

link to Will A Car Radio Work Without An Antenna?

All vehicles come with antennas, and they come in different designs, with some being long and thin, some being retractable, and some being solid and rigid. No matter what the design, you may find...

Continue Reading
link to Why Does My Car Radio Say Enter Code?

Having a modern car radio is incredible due to all the new and technologically advanced features. Some modern car stereos come with an anti-theft system in the form of a radio code. However, most...