Are you a car driver who likes to crank up the music? If so, you’ll need to make sure you have the correct fuse in your fuse box for your amp.

Using the wrong fuse can damage your amp and even start a fire. So, what’s the right fuse for your amp? Let’s find out.

Distribution blocks that I especially like for multi-amp installations are from Stinger, like the dual SPD5622 with two 80A fuses that can support two amplifiers with up to 1000 Watts (peak) each.

In this article, I’ll provide a guide on how to find the proper fuse for your amp and explain why it’s essential to use the correct one.

What Does the Amplifier Fuse Do?

The car amp fuse is a critical component of any car audio system. It protects the amplifier from damage by providing a safe and easy way to shut off power during an electrical short.

The fuse is located between the battery and the amplifier, and it acts as a circuit breaker.

If there is an electrical problem, the car amp fuse will blow and stop the flow of electricity, protecting the amplifier from severe damage.

Do I Need a Fuse for My Amp?

Without a fuse, your amplifier is unprotected from power surges. A car amp fuse protects your amplifier from damage by limiting the amount of current that flows through it.

If you are using a subwoofer, it is vital to use a fuse because the subwoofer draws more current from the amplifier than other car audio components.

How Do I Choose a Fuse for My Car?

Selecting the proper car amp fuse is essential to prevent damage to your amplifier. The amperage rating of the amplifier determines the size of the fuse you should use.

There are two types of car amp fuses:

Glass fuses are the most common type of car amp fuse. They are made of a glass tube with metal end caps. The metal end cap has a small metal strip connecting the fuse’s two ends. 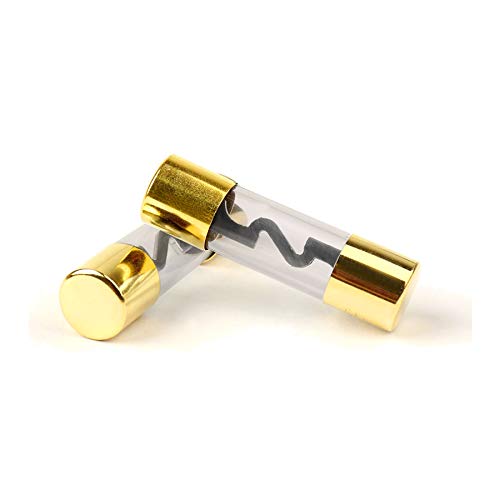 When the current flowing through the fuse reaches a certain level, the strip will heat up and melt, breaking the circuit and stopping the flow of electricity.

Blade fuses function in the same way as glass (cartridge) fuses, but they have a plastic body with metal blades. The metal blades are connected to the ends of the fuse with a small metal strip. 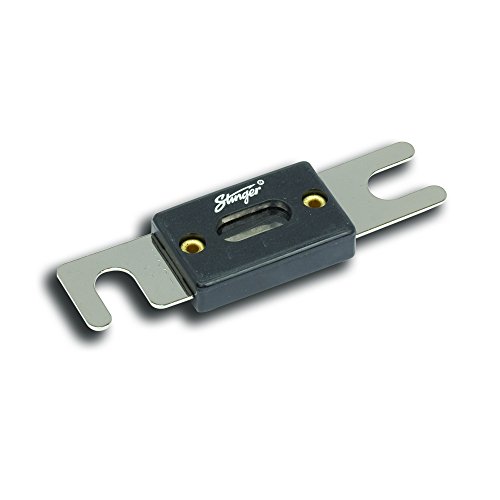 When it comes to the reaction to overcurrent flow, there are two main types of car amp fuses:

Slow-blow fuses allow a larger amount of current to flow through them for a short time without blowing. This is important for amplifiers because they can draw a large amount of current in spikes, especially when the bass hits the subwoofer.

Fast-blow fuses blow as soon as the current flowing through them exceeds the fuse’s rating. These fuses are typically used for circuits that do not have high inrush currents.

For car amplifiers, slow-blow fuses are the best choice.

What Size of Car Amp Fuse Should I Choose?

The size of the car amp fuse depends on the amplifier’s wattage and how many amplifiers are connected through the distribution block.

Most car amplifiers range from 100 watts to 3000 watts, so I listed in the table below the overview of the optimal fuse sizes based on the amps’ wattage:

Where to Locate Car Amp Fuse?

The best car amp fuse location is in the engine bay, near the battery. Other components that are needed to install the car amp fuse include wire, terminals, and a fuse holder.

The short distance between the fuse and the battery is needed to prevent voltage drop, which could reduce the car amplifier’s power output.

As a rule of thumb, the distance should be no longer than 18 inches. Although the voltage drop may not be the most critical factor in determining the length, especially in the less powerful car audio systems, you should always pay attention to the safety of the high amperage installation.

Which Fuse Holder Should I Get for My Amp?

There is no car amp fuse that you can install in the free air, and although it is physically possible, you do not want to do this.

Every fuse should have a designated, solid holder permanently mounted in the car. This is for two reasons: safety and proper current flow.

The most common type of fuse holder is the blade-type fuse holder (link to Amazon). It consists of a housing with two metal blades that make contact with the ends of the fuse. 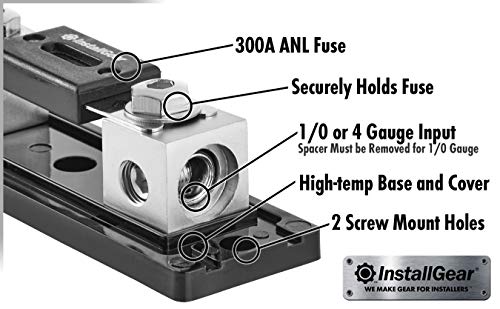 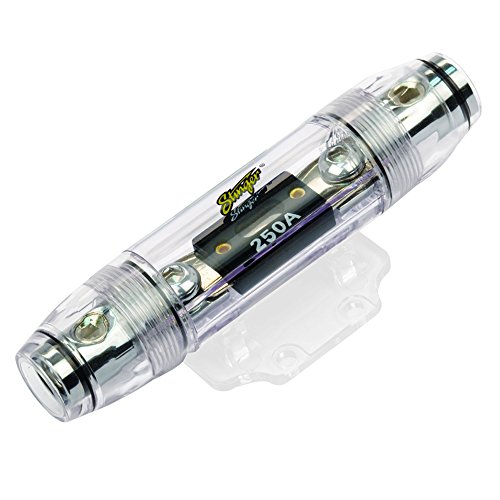 Both holders are suitable for car amps, but the blade-type is more common.

How to Install Car Amp Fuse?

Bare wire can arc and cause a fire if it comes into contact with other metal objects. Always use heat shrink tubing or electrical tape to cover any exposed wire.

To install the car amp fuse, follow these steps:

#1. Locate the battery and find a suitable spot to mount the fuse holder. Make sure the area is clean and free of any flammable materials.

#2. Drill a hole for the wires connecting the fuse holder to the battery. The hole should be big enough to accommodate the size of wire you are using.

#4. Strip the ends of the wires and connect them to the terminals on the fuse holder. Make sure to tighten the terminals so that they make a good connection with the cables.

#5. Insert the car amp fuse into the holder. Make sure that the fuse is inserted in the correct direction.

#6. Cover the fuse holder with the cover and screw it into place.

#7. Reconnect the battery and test the car amp to ensure it works properly.

As you can see, installing a car amp fuse is not tricky, but it is important to follow the steps carefully so that everything is done correctly.

What Happens if the Fuse Is of the Wrong Size?

It is important to choose the right car amplifier fuse.

Using a fuse with too low of an amperage rating can cause the amplifier to cut off more often.

This is because the lower rating means that the fuse will blow sooner when exposed to the same amount of current as a higher-rated fuse.

On the other hand, when the fuse is too large, the car amplifier will be unprotected against power surges. This could lead to the amplifier being damaged by a sudden surge of electricity.

In some extreme cases, overheating the amplifier can lead to a fire in the car and trust me, this is definitely not something you want to experience.

Therefore, it is important to select a car amp fuse with the correct amperage rating for your amplifier. You can typically find this information in the car amplifier’s owner’s manual.

A car amplifier fuse is an integral part of any car audio system. It protects the amplifier from power surges and prevents it from being damaged by excessive current.

When choosing a car amp fuse, it is important to select one with the correct amperage rating for your amplifier. The best way to do this is to consult the car amplifier’s owner’s manual.

Installing a car amplifier fuse is not difficult, but it is important to follow the steps carefully, so everything is done correctly. Always use ring terminals, heat shrink tubing, or electrical tape to cover any exposed wire.